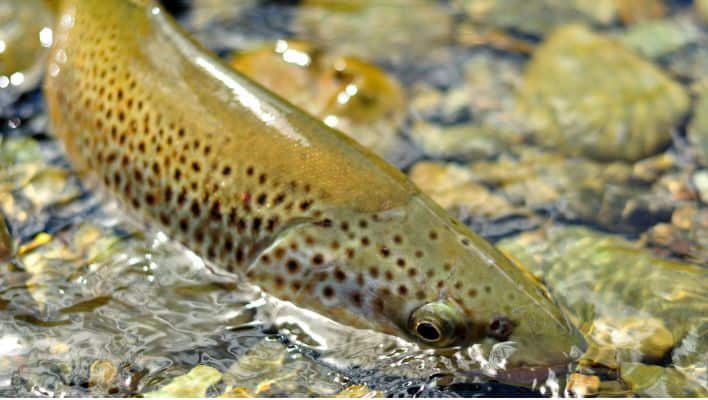 These harmless creatures can be hard to spot, but this doesn’t deter fishermen from wanting to get their hands on them. Thus, it is important to analyze their feeding and behavior patterns. This guide will focus on the Best Time of Day to Fish for Trout, look for flies, and ice fishing.

Best Time of Day to Fish for Trout

It is said that fishing for trout can be difficult yet rewarding, hence why finding the best time to catch them off-guard is a must. The experts at Fresh Water Fishing Advice suggest not to look for them when they’re feeding since this is proven to be the worst strategy for enthusiasts. With that being said, fishing for trout from late morning through mid-afternoon shall be avoided at all costs. Instead, it is recommended to catch them in the early morning, from dawn until 2 hours after sunrise. Another great opportunity to get one’s hands on these fellows is late afternoon, specifically 3 hours before sunset until dusk.

According to Fresh Water Fishing Advice, the trout will feed during the day, into the night. The early morning, however, as well as late afternoon continue to be the favorites for fishermen to get their hands on them due to the good results these timeframes provide. It cannot be stressed enough how important it is to memorize feeding and activity patterns so the chances of getting back home with a massive bite increase.

Research suggests that trolling is highly effective when it comes to catching big rainbow, brown and lake trout, the protagonist of this topic, because it allows the fisher to cover more water than usual. When it comes to trolling, the best time to do catch them is early morning, from sunset to mid-morning, and late afternoon, although it is preferable to do so until dusk.

Unlike the other specimen in the family, lake trout are not considered a member per se. Therefore, the best time to get ahold of them is the late afternoon and early morning. Late morning and midday fishing, as well as nighttime, shall be avoided since it doesn’t provide good results.

Best Time of Day to Fly Fish for Trout

The experts at Fresh Water Fishing Advice express that, during winter, the best time to fly fish on rivers is mid-to-late morning. Midday and late afternoon can provide a good bite as well. Another thing to consider while fly fishing is how the trout behaves when there’s strong sunlight. Since they don’t have protective eyelids, they don’t tend to look for insects on the surface because it would hurt their eyes. Needless to say, they will stay at the bottom, hence why it is recommended to go for nymphs and streamers.

The sunrays are minimal in the early morning and late afternoon. Thus, the trout will feed on insects that land on the water’s surface. With that being said, dry flies tend to be the go-to for fishing enthusiasts instead of nymphs. This is because the insect activity is strong during these times.

Best Time of Day to Fish for Rainbow Trout

A user in the forum Fishing Talks states that rainbow trout can be caught at almost anytime, but they’re harder to spot if they’re popular in the area. These fellows tend to look for shade during hot days, so heading to those areas can provide great results. Another user on the thread recommends fishing for them on the shore, where their activity seems to remain constant during the day.

Since they feed on insects, one of the commentators prefers to catch them during rainy days, because there are plenty to catch and use as bait during and afterward. One of the suggestions in the forum mentions how they can be lured with worms, grubs, crickets, grasshoppers and corn, something that seems to be highly effective. Another tip the community provides is to make sure to not be spotted by the fish, which might sound like a no brainer but it’s helpful nonetheless, and avoid using heavy lines and sinkers. Of course, depending on the obtained results, methods can be switched until being satisfied with the spoils of the hunt.

Best Time of Day to Ice Fish for Trout

The best time to ice fish for trout tends to be early to mid-morning and it tends to slow down from late morning through early afternoon. However, their activity increases again from mid-afternoon until sunset. These two timeframes will get better results than nighttime, which is considered a hit or miss by experienced fishermen, mainly because of how varied the results can be. Some nights can be more productive than others, so choosing to “shoot in the dark”, pun intended, is completely up to them.

Mobility is key when it comes to fishing for trout through the ice. Fishing on the same spot every day might give good results in the short run, but it’s not wise to just dig one hole in an icy surface and hope for the best or getting too attached to a single location. Instead, the experts at Fresh Water Fishing Advice recommend being prepared to drill more than one and have the equipment ready for when it’s time to move again. With these steps in mind, both experienced and new fishermen will have a considerable advantage over the trout and a huge specimen to carry home.

Trout don’t have protective eyelids as humans do, so they won’t come out to the surface during days with strong sunlight since it would hurt their eyes. In the early morning and late afternoon, insects tend to land on the surface of the water, only to be caught by these fellows afterward. Another thing to keep in mind is that they will feed during the day, into the night. Thus, early morning and late afternoon are considered to be the best time to catch any type of trout, due to the good bite that can be obtained during these time frames.