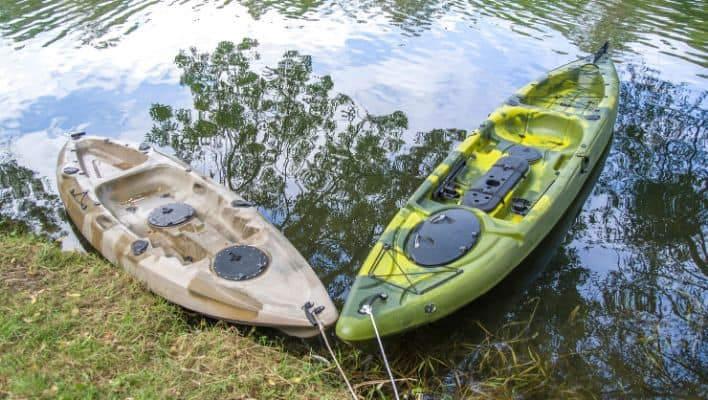 A sit-on-top kayak is among the most common types of models that are used by paddlers. Now, what exactly are the pros and cons? This article will mainly focus on that, as well as giving a brief description at the beginning. With this information, it aims to help first buyers.

Description of a Sit-On-Top Kayak

A sit-on-top kayak lacks an enclosed cockpit and the paddler is positioned on top of the vessel, above the water’s surface. They’re known to be user friendly due to how easy they’re to hop in and out of, but more on that later.

This is the most popular type of vessel for beginners and fishermen since it doesn’t make the user feel trapped in case of capsizing. Another great thing about this is that they’re easier to reenter, allowing the user to get back on track.

In a similar fashion to its counterparts, it is important to take into consideration who will be paddling the vessel, the type of kayaking the buyer wishes to do, as well as the duration of the expedition.

When it comes to buying sit-on-top kayaks, longer models tend to be the best choice for those who want to explore the waterways with a speed bonus. To achieve this, the hull length needs to be taken into consideration, since it tends to rely more on it than on the paddler’s height.

Whether a sit-on-top kayak will be needed or not depends, partially, on the paddler’s style of kayaking. Due to them having a higher center of gravity, something that will be discussed in the next section to help decide whether it would be bought or not, these models are more suitable for a leisurely paddle in a quiet lake, mainly because they sadly don’t have an efficient paddle stroke. Now that this has been covered, let’s jump straight into the pros and cons.

When it comes to a sit-on-top kayak, they’re well-known for being the most user-friendly of them all. Stability doesn’t seem to be a problem since they’re sturdy and easy to get in and out, without mentioning that the user won’t feel confined to it.

Another great thing about them is that they’re self-bailing, thus, sit-on-tops have small holes that allow the water to drain through them, also known as “scupper holes”. This proves to be extremely useful in the event of a capsize, making them the best fit for surfing zones, especially because the paddler doesn’t have to carry a bilge pump while exploring the waterways.

It cannot be stressed enough how easy they are to get out of. Any kayaker can come in and out of them as much as they please, reducing the worry of whether they’ll be able to slip off of them as quickly as they want to. Therefore, beginners and people who get easily startled can maneuver a sit-on-top with ease, since the ease of movement will be the least of their worries while they’re paddling their way around the lake.

On the other hand, they’re perfect for warm environments and family trips, especially those who want to share the experience with kids that love to swim. It is also known that they are perfect for paddlers with any body type, which means that both tall and short paddlers won’t have to worry about feeling restrained. After all, throwing that concern away makes the experience even better, doesn’t it?

Sit-on-top kayaks are known to have a significantly higher center of gravity, as well as being wider than their sit-inside counterparts, giving them a higher degree of stability. Thus, this makes them remain upright when the paddler is sitting on it with the keel underneath them.

Another great thing about the sit-on-top kayaks is the fact that they’re technically unsinkable because of the enclosed design of their hulls. Also, there’s plenty of room for bulky items thanks to its open “tank well”.

Of course, not everything is perfect when it comes to sit-on-top vessels, mainly because the kayaker will be more prone to getting wet while exploring the waterways.

On the other hand, their wide beam makes them slower than a sit-inside kayak of lesser width, which means that they will be more difficult to propel forward, making them more suitable for short-range excursions and kayak fishing. Combined with their higher center of gravity, this lowers their degree of secondary stability.

Is Being Open Bad?

The open cockpit is also among the issues with a sit-on-top kayak, despite them being user-friendly. Why is that? Simple: it makes placing their knees against the underside of the deck more difficult for the paddler, limiting their control and maneuverability over the vessel.

An open cockpit also exposes them to the elements, especially sunrays and waves breaking over the bow. On a side note, the wide beam forces them to use a longer paddle than they usually would, doubling the effort that is required to propel it forward.

Their higher profile can also be troublesome for both experienced and new kayakers, mainly because it causes it to be more affected by wind, turning what would be a regular leisure trip into a nightmare, especially during windy days.

The self-draining scupper holes don’t come without flaws either since them being at the bottom of the kayak’s cockpit cause them to have a small amount of water in the bilge, something that would represent an inconvenience for anyone who’s paddling on top of it, especially those who are loading their gear on the vessel.

These imperfections need to be taken into account alongside the benefits before making any decision.

A sit-on-top kayak lacks an enclosed cockpit and the paddler is positioned on top of it. Due to them being easy to slip in and out, they’re known as being the most user-friendly of all. They’re sturdy and safe for both beginners and children, as well as perfect for any body type.

They have a significantly higher center of gravity and are wider than their sit-inside counterparts, giving them a higher degree of stability.

Sit-on-tops are also technically unsinkable because of the enclosed design of their hulls. Of course, nothing is perfect, since their high profile is troublesome for paddlers.