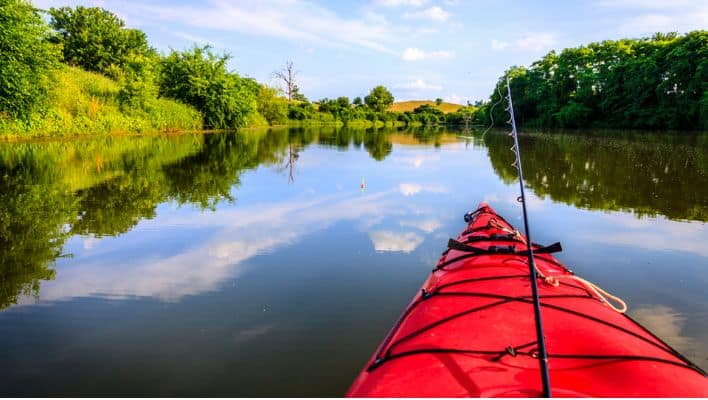 When it comes to kayaking, one of the most important decisions will be which model would be worth spending on. There are several factors to take into consideration, as well as the type of activity the vessel will be destined for. This guide will provide different price ranges per kayak.

How much do kayaks cost?

Before deciding to spend money in a new vessel, it is important to determine where the kayaking will take place, to determine which of the models are going to be more suitable for the task and preventing unnecessary damage.

Whether the buyer decides to spend their days on a small lake or a river, the choice of model will be different. It’s not a secret how popular kayaking is. However, it is important to take into consideration how much money one would be willing to give when it comes to owning one of these vessels.

It might seem extremely evident, but this decision will prove crucial at the moment of investing in something that will be either a summer activity with the occasional pauses or a long-term hobby. This not only will determine the type of kayak, but also the type of paddles that will be required, among other things. With that being said, let’s dive in, pun intended, considering the topic at hand.

The money that will be spent depends on both the type of kayak the customer is looking for, as well as their needs. Most of the time, a kayaker, whether it’s a first buyer or an experienced practitioner, will spend between $150 and $600 for it, so it’s important to choose wisely.

When it comes to materials, inflatable kayaks are the most affordable of them all, their prices going from $200 and up. Of course, this low cost comes with a price, mind the redundancy, since they’re known to be the least sturdy and aren’t that versatile either, often suited for beginners that will spend their time leisurely rowing on a pond.

Next are the plastic kayaks, being a little bit more durable than their inflatable counterpart, although they can easily get damaged and are almost impossible to repair.

Sea kayaks, on the other hand, are one of the priciest models known to man. Their price range goes from $1,000 to $3,000, offering a sturdy vessel that can fight against the elements with ease. Of course, they don’t fall short on storage either since they have a lot of room for both space and adjustable seating. While they’re not precisely the type that would make the wallet sigh in relief in the short run, they can be a safe, long-term investment for those who are willing to become professionals in this field.

According to The Cost Guys, a kayak from Dick’s Sporting Goods’ price ranges goes from $200 and $388 in Amazon, which covers a wide variety of models that go from inflatables to those that are made for ocean sports. Of course, it is important to point out that the price of a kayak will depend mainly on its capacity, material and durability. Thus, it is highly likely that this will fluctuate between models. For example, those that are built to withstand rough conditions are the pricier than their counterparts.

They tend to have a few common features here and there, such as a large cockpit that allows the user to get in and out with ease, as well as a lot of storage room. Beginner models tend to be heavier and more stable than their more advanced counterparts.

They generally cost between $200 and $350, although the experts at The Cost Guys recommend investing in them if the buyer plans to turn kayaking into a summer sport and nothing else. One thing to keep in mind is that cheaper vessels don’t tend to last that long, whereas beginner kayaks will survive several summers before the need to buy another one rises again.

It might seem like a no brainer at this point, but a wide variety of models to choose from translates into different prices per type. When it comes to types, they’re split into fishing kayaks, ocean or touring, sit-on-tops, white water and canoe-hybrids. Their prices are different from each other, but more on that later.

Now, when it comes to fishing kayaks, they tend to cost around $300 as an average. These are said to be pricier than their sports counterparts, often coming with a deep cockpit and a seat back, as well as storage and holes for a fishing rod.

Touring (or Ocean) kayaks are the most expensive model, compared to their siblings, often costing $1,925. They’re long and sturdy, which translates into high durability that comes in handy during long trips and rough waters. These long fellows are suitable for those who want to get into trekking from the moment they lie their eyes on a kayak and consider starting to practice this sport.

White water kayaks are a creature of their own. They’re pricier than the standard beginner vessel but more affordable than their touring counterpart. These sturdy models are perfect for going down rapids, mainly thanks to its design that allows any kayaker to explore these risky waterways safely.

As for their price, they reach the $1,059 threshold, only falling short by a difference of $866 when compared to ocean kayaks. With these prices in mind, making a choice should be a bit easier.

The model that will be purchased will heavily depend on whether the buyer decides to kayak in a small pond or a river. Kayaking is a very popular activity, prompting a lot of people to start rowing. The money spent will depend on their needs and the type of kayak they’re looking for. Most of the time, they’ll invest from $150 to $600 on a kayak, although the price might vary. The least expensive ones are the beginner kayaks, often costing $200 as a minimum. Next are the white water and touring kayaks, which are close to the $2,000 threshold.