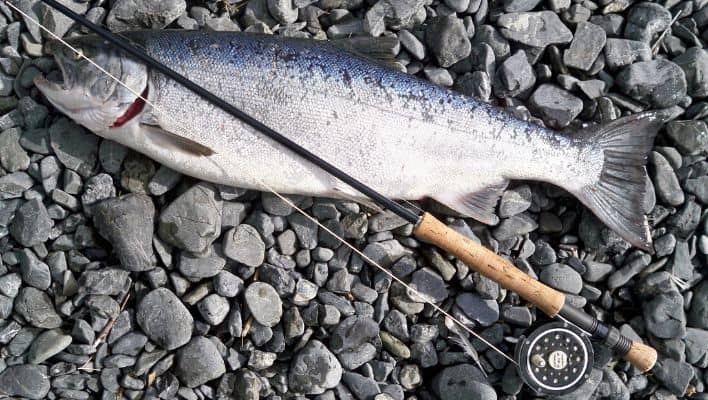 Salmon are among the most popular species. Alongside tuna, a lot of people indulge themselves with their unique taste, prompting them to want more. As a result, most of them want to catch this delicious critter but the experience can be challenging for new practitioners. This guide aims to help find the Best Time to Fish for Salmon.

Best Time to Fish for Salmon

When it comes to fishing for salmon, even the experts tend to struggle. Because of this, it is recommended to focus on the parts where they’re present. The time that takes to get ahold of them may vary from season to season, hence why it’s important to study their behavior patterns closely. One tip is to look for the places where they would be resting, also known as slack water.

Something to take into consideration while fishing for salmon is that these species prefer low lighting conditions. Thus, overcast days tend to be the go-to for those fishermen that want to get their hands on the most abundant bite with the biggest specimens. They can also be caught during bright, sunny days but they will be less active, often preferring to remain in the depths.

The experts at Fishing Mag recommend fishing for salmon at first light in the morning. This is mainly because new fish arrived during the night, so it would have been impossible for them to see any hardware at that time. It is also suggested to look for them at the top of the tide since very few fish can be spotted after these two hours have passed.

On the other hand, the best live bait for salmon is roe eggs, which can be both harvested and bought. When it comes to artificial lures, the best option tends to be the spinner type. Sharper hooks can make things easier for fishermen since the salmon’s thick jaw is proven to be challenging to mess with. Now, with that being said, let’s jump straight into the best time to fish for salmon per season.

Fishing for Salmon in Winter

Winter can be an excellent season to fish for salmon, mainly because they’re cold-water fish. Thus, they prefer water temperatures below 65 degrees, feeding on smelt to survive. When it comes to catching salmon, ice fishing tends to be the most productive way to do so during winter.

A great tip to get ahold of them is using smelts and live minnows for bait. Jigs are also an effective method among Ice fishermen. During this season, salmon can be spotted within 15 feet below the ice. On the other hand, an interesting thing about winter is that cold temperatures tend to lure most freshwater species, without mentioning that there will be fewer fishermen by this time, similar to what happens during early morning fishing in summer. Another great tip is to avoid lakes or rivers with high currents since it’s both difficult and dangerous.

Fishtec Blog has several tips for summer salmon fishing, one of them advising the reader to do so in the very early mornings to late evenings. This is mainly because the temperature is at its lowest and the sun is the weakest. Another reason to fish at these times is that there are fewer fishermen on the lookout, reducing the competition for prime spots.

Paying attention to shallow, fast water and runs is a must. They are highly oxygenated and it is likely that there will be more fish roaming around. Once the first movement has been detected, it is important to use a good covering cast. On the other hand, fishing during the night may or may not be productive, so one good strategy is to use a riffled surface fly to wake them up. This can get this attention and maybe they will bite.

One interesting thing about salmon is how close or far they are to the surface across seasons. During June, July and August, they go for the depths, often reaching the 30 to 60 feet mark. Thus, the best method to catch them is using a lead core line or a downrigger while trolling, using copper, gold or silver lures. With this information in mind, preparing the rods and the bait shall be easier.

Fishing for Salmon in Fall

The experts in American Boating state that the main salmon run occurs every fall, although there’s no start date. It’s usually done by the end of October, starting in early September. However, this may vary depending on the weather since the lack of rain and warm weather can delay their arrival, whereas cooler temperatures and extra downpours can prompt them to start earlier.

According to the Freshwater Fisheries Society of BC, autumn tends to be the best season to fish for Pacific Salmon. This is mainly because the coho starts entering rivers along the west coast at the beginning of September, followed by chinook and chum. One of the most effective methods to lure them is placing the lures below a fishing float, at least when it comes to medium-to-fast-flowing rivers.

Another thing to take into consideration is how deep they go during fall. Similar to spring, salmon tend to feed near to the surface and close to the shore. Flyfishing, casting and trolling with lures and bait are among the best methods to catch them. The experts at the Maine Department of Inland Fisheries and Wildlife recommend using streamer flies and lures resembling smelt since they provide great results.

Salmon tend to prefer low lighting conditions, hence why overcast days are recommended as the best time to catch them, followed by early mornings. As a cold-blooded species, they prefer temperatures below 65 degrees and swim closer to the surface during winter and can be found within 15 feet below the ice. In summer, however, they retreat to the deeper waters making their capture more challenging than prior seasons. The main salmon run occurs during fall, starting in early September, although they might come out sooner if there are cooler temperatures and extra downpours. Fly fishing is among the best methods.