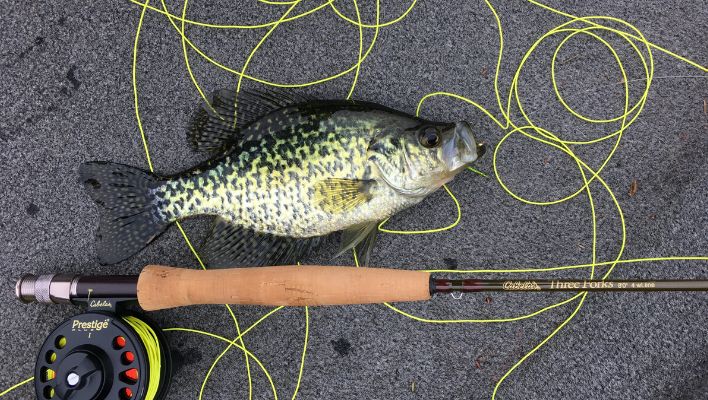 Freshwater species seem to be an easy feat, but this doesn’t seem to be the case with all species, particularly crappie. A lot of fishermen have been wanting to get their hands on them, but analyzing their behavior patterns can be frustrating. This guide aims to help to track them and find out when the Best Time to Fish for Crappie.

Best Time to Fish for Crappie

The crappie is a freshwater species that can be found in lakes, ponds and calm sections of slow-moving rivers. Clear waters with muddy or sandy bottoms are their favorite environments, mainly because it allows them to dig their nest, without mentioning that there is a lot of vegetation for them to go around. Not only it shelters them but also provides them oxygen, crucial to their survival. Their preferred feeding times are mainly during the dark hours, which will be explained below.

It cannot be stressed enough how important it is to track the behavior and feeding patterns of the fish that are going to be caught. This information is a key piece of the strategy since certain timeframes provide better or worse results, which may vary between species. When it comes to fishing for crappie, it is highly recommended to catch them during their feeding time, but more on that later.

The crappie is known to feed between the hours of midnight and 2 am. This means that nighttime fishing can provide good results, as well as dawn and dusk since they grab their lunches at these timeframes too, These fellows prefer feasting on shallower areas, where they can easily find minnows and insects, their favorite meal. With this in mind, it crucial to prepare the bait accordingly to obtain the best results. Another thing to take into consideration is that they spend daylight hours on the deeper parts of the water, making them harder to catch.

The crappie’ spawning season tends to provide good results when it comes to daylight fishing. This is mainly because the males guard their nests, which are usually in the shallows. Since they will attack anything and everyone that dares to disturb the eggs, this can be a great opportunity to get the rods ready and take advantage of the male crappie’s paternal instinct. On the other hand, fishing in the afternoon has proven to be effective during winter, since the water temperature rises and the fish will often swim closer to the surface to find their next meal.

Best Time to Fish for Crappie in Winter

According to Kayak Guru, fishing for crappie during winter can provide great results. Thus, it’s considered one of the best times to get ahold of these creatures. The reason? They haven’t gotten into their semi-hibernation state yet. Crappie can be very active during winter months, which means that ice fishing will go smoothly.

However, it is important to know that crappie will be in deeper water during winter, around 15 to 20 ft. This is mainly because they’re moving in groups and can be found near underwater structures, boat docks, trees or brush, to name a few. On the other hand, the water tends to be warmer in southern areas, which means that there will be more fish to go around. During these cold months, it is recommended to combine sonar equipment with the knowledge of their possible locations if the plan is to fish for them in the ice.

Best Time of Day to Catch Crappie in Summer

The crappie’s behavior during summer is interesting. Once the hotter months reach their peak, they tend to head back into the deeper waters, leaving their nesting sites defenseless. Twilight hours tend to be the best time to catch them in this season since this is the timeframe where they tend to feed. Nighttime can provide the same results as well, especially because crappie usually swim closer to the surface before and after dusk.

However, fishing for crappie can be difficult during summer, so special equipment and trolling will be required, alongside a whole bunch of patience. It might take time, but the places where they’re cooling off can be found. With this in mind, deciding whether to catch them during summer or not is completely up to the fishermen, but they will need to consider all the details above before making their choice.

Best Time to Fish for Crappie in the Fall

Another season that will require patience, since fishing for crappie during autumn is not an easy feat either. This is mainly because the water temperature tends to remain the same at all depths, with no exceptions. Thus, it is likely that crappie will be constantly changing locations, making their behavior more unpredictable and, as a result, they become harder to track down. Fishing for crappie during fall can be frustrating but it will be rewarding once they’re ready to be served.

One thing to take into consideration is that crappie schools are preparing for the upcoming winter, which means lesser food. This means that they will be looking for minnows nonstop, so they’ll be easily tempted if their favorite meal is used against them as bait. In Kayak Guru, the author recommends going fishing during the night, since they come closer to the shallows during their feeding time. Fishermen will need to play their cards correctly and plan accordingly to come home with an excellent bite. Of course, this will mean picking the best bait, something that will determine how productive the fishing trip is.

The crappie is a freshwater species that can be found in lakes, ponds, and calm sections of slow-moving rivers since they tend to have muddy bottoms and vegetation that allows them to dig their nest and provides them shelter and oxygen. They tend to be easier to spot during their feeding time, which happens during dawn, dusk, and from midnight to 2 am. Daylight fishing is especially possible during their spawning season because the male crappie tends to guard its nest and attack ferociously anyone who dares to disturb its eggs. Winter is the best time to fish for them.