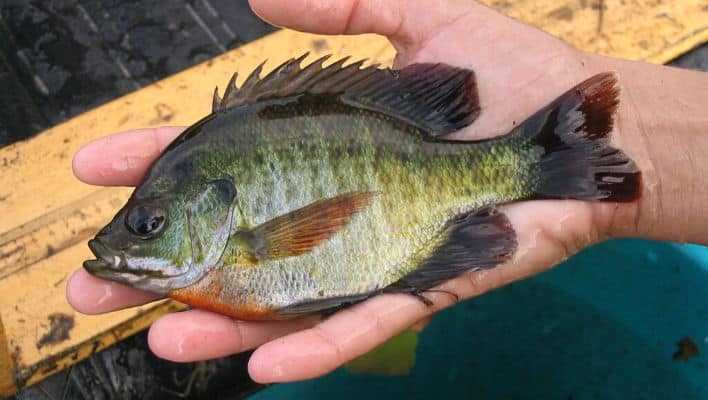 Fishing for bluefish can be frustrating if done at the wrong time, without knowing where or when to look. Waiting around at the wrong place and time can be annoying as well. To prevent it, this article will focus on the best seasons and Best Time to Fish for Bluegill.

Best Time to Fish for Bluegill

As with any fish specimen, learning at which times they’re more active has been proven crucial to get ahold of the biggest of them all. Not only this will make things easier and efficient but also transform this already daunting task into something more enjoyable. After all, it would be extremely frustrating to just bring the rods and wait around for the fish to bite only to realize that one has been fishing at the wrong place and time. Now, with that being said, let’s dive in, pun intended.

It is common knowledge that bluegills can be caught during the late afternoon, specifically from 4:30 to 7:00 pm. Their activity tends to slow down before sunset, although this doesn’t always have to be the case. However, these timeframes can give an idea of when to look to have great results.

Another thing to keep in mind is that bluegills tend to go on a feeding frenzy in the late evening, although they start eating at an earlier time. This is due to how much they prefer cooler water. The experts at Fresh Water Fishing Advice state that this prompts the bluegills to eat before calling it a night. Around 5:30 and 7:00 pm, their feeding activity tends to decline, so it is important to catch them while they’re aggressively stuffing their faces.

Also, shadows caused by vegetation and docks allow them to have a better view of surface food, specifically insects, which are more active during these hours, something that the bluegills won’t want to miss. However, this may vary during cold days and hours before and after major storms. With this information in mind, fishermen will be able to prepare the rods and get sailing before the bluegills decide that they’ve had enough for the day.

Best Time to Fish for Bluegill in Winter

During winter, their location can change. The experts at Sportman’s Connection recommend looking for bluegills at first ice, specifically inside green weeds. They can be seen when the ice it’s only a few inches thick and clear. Fishermen can cover a lot of ground by boat although electronics will be needed to find the remaining weeded areas. During this time, bluegills can become less of a willing biter but this can get better at dawn and dusk.

In winter, it is recommended to fish with lighter equipment to catch fish more efficiently. One interesting thing about the bait is that horizontal lures are proven to be better than their vertical counterpart. On the other hand, the thicker the ice, the harder it is to find bluegills since the lack of light from the surface kills any remaining weed. If this doesn’t sound bad already, it is worse for fishermen, since this species vacates their first ice location, often swimming into deeper waters. This is often the place to go to if they’re intending to get ahold of them in the mid-winter. Soft-bottomed flats are recommended as well as deep holes, where they feed on both insects and zooplankton.

Best Time of Day to Catch Bluegill in Summer

Summer is seemingly the best time to fish for bluegills since the females tend to leave their nests to feed while the males guard their nests after spawning. Thus, this means that there will be a school of hungry fish ready to be caught. Weeds, lilypads and brush close to their spawning sites are the best places to look and it’s possible to find them in slightly deeper waters as well. Unlike their partners, male bluegills will be waiting for the eggs to hatch to go out.

Once the eggs hatch and the spawning duties are complete, bluegills are easy to spot during summer, since they can be found where there are weeds in the proximities. Even if it’s possible to catch them straight from the dock, shallow water fish are small most of the time. To catch larger specimens, it is recommended to go looking for deeper weed lines since these are their favorites, although this will depend on what is hatching on the soft-bottomed areas. One thing to consider is that jigs with soft plastics or worms tend to be highly effective to lure big bluegills. On a side note, fly fishing during a summer evening can be an easy way to get ahold of them because this is when they rise to find insects.

Best Time to Fish for Bluegill in the Fall

Like Summer, Fall provides equally amazing fishing opportunities, according to the experts at Sportsman’s Connection. This is mainly because of the changes in this season but it means that fishermen need to adapt to catch big bluegills. It is recommended to look in deep weed edges, their favorite hangout place during summer. If they can’t be found, another tip is to hunt them down where there’s still green vegetation, inside which they will be. However, they tend to move to deeper holes, soft-bottomed flats and the weeds’ edges. Since they could be suspended, the experts also state that electronic equipment needs to be used.

Bluegills can be caught during the late afternoon and early evening, specifically from 4:30 to 7:00 pm, although their feeding activity starts reducing around 5:30. This is mainly because the water temperatures are cooling down, which is something that drives them into a feeding frenzy that lasts until they decide to call it a night. Fishing for bluegill in summer and fall tends to be the better option but this is possible during winter as well. However, they tend to change locations to look for their next meal, since there’s less light for the vegetation they eat to survive.

If you like this article why not check out our article that gives you tips on When is The Best Time of Day to go Fishing.