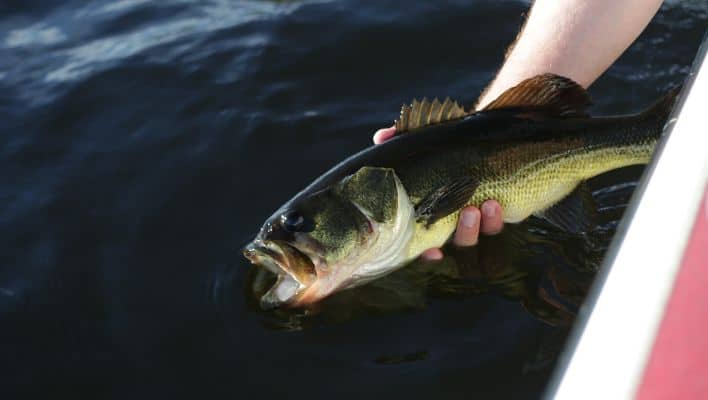 Catching bass must sound like a daunting task for inexperienced fishermen, whereas those who have a few bass under their belts remember with slight annoyance or bemused by how their first hunt was. This guide will focus on the best time of the year and the Best Time to Fish for Bass, especially during seasons.

We have found the Best Time to Fish for Bass are late nights, and early morning before the sun begins to warm up the water throughout the day, the best seasons to catch bass are spring and fall as the water temperature tends to be the perfect temperature for bass feeding.

We go into a lot more detail to get you primed and ready to catch that monster bass on your next fishing trip out below.

Best Time of Year to Fish for Bass

When it comes to fishing for bass, especially if a largemouth bass is the one you are after, it is essential to pay attention to its spawning behavior. Most of the time, bass tend to do so during late winter and spring in the southern and northern regions of the US, respectively. The reason for this is due to the water temperature. If it reaches the 60 degrees, these little fellows start feeding heavily and move into shallower parts so they can reproduce with ease.

Another thing to take into consideration is the fishing seasons across the states, mostly because the eggs inside the spawning fish need to be treated with care. Besides, it takes the females a few weeks for them to regain appetite once the eggs have been laid. It cannot be stressed enough that the spawning patterns are a crucial factor when it comes to catching a big fish, so having a full understanding of them is essential.

Best Time to Fish for Bass in a Pond

As it was mentioned earlier, higher temperatures tend to be bass’ favorite. For that reason, the best time to fish for them in a pond is both Spring and Fall. Why? Because, once the water temperatures go above 10 degrees Celsius (or 50 degrees Fahrenheit), they will start looking for shallow areas to spawn, which usually happens on the former, while they will focus on gathering food on the latter. Another great time to start bringing up the fishing rods is after a considerable rainfall.

Best Time to Fish for Bass in Winter

The experts at Mossy Oaks mention that it’s a popular opinion that the afternoon is the best time to fish. This is due to that, between 2 pm and the sunset, the water has been warmed up by the sun, the baitfish are active, and the basses are moving around. Another great time to catch them in winter is during daylight, although this especially applies to smallmouth. Thus, it is recommended to start fishing a few minutes before the sun comes up.

One thing to keep in mind, though, is that catching bass during winter can be quite challenging. Some southern states that don’t suffer from the effects of this time of the year don’t have that much of an issue since their lakes don’t tend to freeze, which means that people will be able to find bass whenever they want to. It is recommended to fish before 4 pm since the air temperature is the warmest, spiking their activity. Another thing is light sensitivity since it becomes the least of their priorities due to them being on the lookout for warmer waters.

When it comes to states where lakes freeze over, midday bass bites are a more viable option. Despite people believing it otherwise, they can be caught through the ice. Most of the time, they will be active up until 3 pm, so it’s better to catch them while they’re still roaming around.

Best Time of Day to Catch Bass in Summer

When it comes to fishing for bass during summer, nights are a go-to. Most of the time, they will take advantage of the low light and cooler temperatures to feed before the heat returns. However, if the fisher is not looking forward to freezing during the night, they can also fish at dusk and dawn, since light penetration is minimal. Another critical factor is how quiet the waters are during these times, allowing the bass to feed with ease, not to mention that they’re more active.

Research suggests that the night bass bite can also be caught with ease during a full moon. Thus, fishers should avoid fishing in the morning hours afterward, since they’re likely full from the events of the night before. It is recommended to wait until the following evening to give them a chance to seek for food again, which will increase the probability of catching the biggest of them all.

Best Time to Fish for Bass in the Fall

During fall, bass fish tend to stuff their faces with shad, minnows, frogs, and bluegills to get ready for a long winter. Largemouth and Spotted bass are easily spotted when dusk is drawing near, specifically between 6 pm and the former, which adjust perfectly to their ideal temperature, color, and depth perceptions as well as the advantage they will have over their prey during this time.

First of all, water temperatures will start to cool off around dusk, although it will stay warm enough, compared to how it was during the morning. When it comes to color and depth perception, the light during this time allows them to catch their prey with ease. One more thing about why bass prefers roaming around during dusk is that it reduces the ability of their next meal to see them. On the other hand, their behavior is similar to their summer feeding, since it’s better during this time of the day as well. Understanding this will provide the fisher with crucial information to get their hands on them faster than they can google tips on which bait should they use for this task.

My biggest tip on the Best Time to Fish for Bass would be to keep a fishing diary. So this may sound a little strange at first. Still, if you are going to be fishing the same waters over and over, then you will find bass seem to be a creature of habit, and one lake can differ from another, so having local knowledge is a brilliant advantage over the bass.

It’s worth noting that all the above about time and time of year will put you in the right ballpark, but honing in on that perfect time will be gained by local knowledge of the lake.

Make notes of your catches their times don’t forget the days you return empty-handed see if patten emerge to see if your local lake doesn’t produce at a particular time.

Spring and fall tend to be the best seasons to catch bass, precisely due to how they prefer higher temperatures to both spawn and feed. However, they can be found in winter, but the task will be a little more daunting because of the ice that covers the lakes in some states, despite being possible to do so. When it comes to spring and fall, the ideal time frame is around dawn and dusk, since waters are quieter and cooler in temperature than during the rest of the morning. It is possible to catch some bass on a full moon night as well.