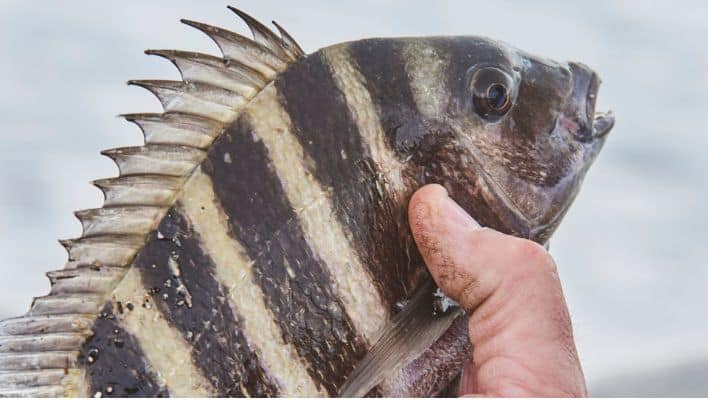 Sheepshead is as tantalizing as other species. A lot of people want to get their hands on this particular creature but the timeframes in which they’re active can be confusing since their activity depends on the tides. To provide better guidance, this article will focus on the Best Time of the Day to Fish for Sheepshead.

Best time of the Day to Fish for Sheepshead

High tides are usually the best time to fish for sheepsheads. It is recommended to look around docks, bridges, piers and in the surf, mainly because they have barnacle-encrusted pilings that they love to frequent. To have their favorite meal, sheepsheads usually take advantage of the high tides, which tend to submerge their snack and make it reachable for them. For better results, it is advisable to use fiddler crabs and live shrimp since they’re also among the animals they tend to prey on.

One important thing about their feeding patterns is that they rely on tidal movement. Their bite is known to be the best two hours before and one hour after the tide peaks. This is mainly because they feed on small crabs and shrimp, which are usually swept down during that changing period, whereas barnacles tend to prefer moving water. On the other hand, the sheepshead, also known as the freshwater drum, are strongly nocturnal. It has been reported that most of the biggest catches usually happen at night.

Fishing for Sheepshead during Winter

December to April is the best time to fish for sheepshead. They start grouping during winter when they start to prepare for their spawning season, which happens between March and April. According to the Coastal Angler Magazine, other species that inhabit the sheepshead’s usual spot move to deeper waters, thus, making them easier to locate without other fish interrupting. Tons of fishermen take advantage of this opportunity, allowing them to catch the biggest sheepshead of them all.

Summer tends to be the toughest season to catch sheepshead, mainly because they spread after their spawning season is over. Another thing to mention is that, during these times, other species tend to move into their regular spots. However, according to The Online Fisherman, summer can be an excellent time to fish for sheepshead since this is when crabs and bivalves, their favorite meal, tend to spawn, which means that there will be plenty of them to go around. Their usual spots are inshore, specifically estuaries, bays and coastal lagoons, where they prey on blue crabs, clams and oysters.

Fishing for Sheepshead in the Fall

When it comes to the general recommendations to catch sheepshead, it is said that it’s better to get ahold of them as soon as the water begins to cool down. This usually happens from November to late February, which means that good results can be obtained during autumn, up until winter. The Online Fisherman states that, in this season, sheepshead often spend their time in the grass flats and mangroves, showing up to the ocean-side piers and jetties while preparing for their spawning season.

Similar to summer, the sheepshead takes advantage of its juvenile prey during autumn. This provides equal opportunities to fish for bait and luring these hungry fellows effectively. A tip that remains a constant during the fishing season is looking for sheepshead when the tides change if fishing at flats, mainly because they swim in and out of the grassy areas where they hunt their meal. When it comes to piers, bridges and seawalls, these remain the best choice to track them down, as they usually conglomerate there to eat both barnacles and juvenile oysters.

High tides are usually the best time to fish for sheepshead, mainly because it brings out the blue crabs that hide in the depths and submerge the barnacle pilings, one of their favorite meals. They can be found around docks, where they take advantage of their juvenile prey in both summer and fall, while they prepare for their mating season. Their usual spots are inshore, specifically estuaries, bays and coastal lagoons. Even if it’s tough to find sheepshead during summer, their favorite meal tends to spawn during this time. Thus, this will mean that there will be tons of them.