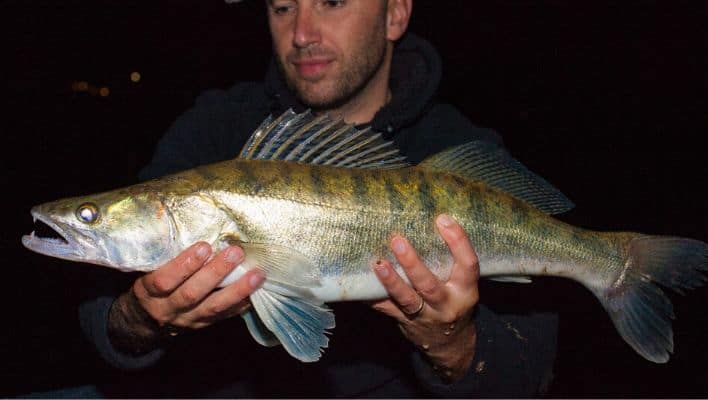 These big fellows are surely unique. Widely known for being the biggest of their species, the Zander fish are tantalizing for fishermen, both experienced and new. With that being said, this guide will focus on tips for fishing them, their seasonal behavior, and the Best Time of Day to Fish for Zander to catch them.

Best Time of Day to Fish for Zander

Aside from being the largest member of the perch family and having a tough, muscular body that slightly resembles a pike, the zander is well-known for its eyesight. Their large eyes normally turn opaque in murky waters, thus, giving them an advantage over their prey, since it helps these fellows to spot their next meal. Because of this, their vision doubles its capacity at night, allowing them to feed during the twilight hours, which are seemingly their preferred time to eat. They can be easily spotted during dawn and dusk, making them the best time to get ahold of them, according to the experts at Bad Angling.

Before delving more into their behavior patterns during winter, summer and fall, as well as some advice to get ahold of them with ease, one thing to take into consideration while catching Zander is their favorite feeding places and where to find them. For one, they tend to love large, well-oxygenated waters like reservoirs, gravel pits and large rivers. When it comes to feeding places, these excellent predators prefer murky, heavily-colored waters to look for their next meal. Thus, the canals and deep rivers are a go-to, as well as bridges and other structures because of their reduced light levels that allow them to hunt with ease. Bad Angling recommends presenting the bait slightly further upstream of a bridge for better results.

Now that bait has been brought up, the Zander are carnivores that can eat shrimp, mussels and other coarse fish. They can even eat each other. A little disturbing, yes, but this goes to show how much they love feeding on other fish. Research also suggests that dead baits are a must while catching, especially with roach, a section of eel, lamprey and sprats.

Fishing for Zander in Winter

Warmer climates tend to be the Zander fish’s favorites, but they can be found in winter as well. This season is considered to be the best for fishing enthusiasts, although this is mainly because the river banks are completely isolated during this time of the year, which means that they won’t have to worry about other people catching all of them before they even get to prepare the bait. Another thing to keep in mind is that mild, windy conditions and colored waters, that are mainly caused by rising levels after heavy rain, tends to stimulate these big fellows into feeding. However, the experts in Sunline Fishing explain that this could be due to low light levels.

According to the blog Samed Monds Fishing, those who fish for Zander from deep waters need to be extra careful. Why? Because, if they’re brought up to the surface quickly, the swim bladder can gas up, changing the depth dramatically, something that both experienced and new fishermen surely wouldn’t want. The author theorizes that this could be due to them becoming acclimatized to being near the bottom.

Research suggests that they’re most active in summer, making it the ideal season for both experienced and new fishermen to get their hands on the Zander. Jonathan Nellfors, author of Casting for Zander! noted, during his early beginnings in catching this particular fish, that these fellows tend to prefer warm summer days. These patterns become important arsenal when it comes to getting one’s hands on this tough creature.

Another thing to take into consideration while getting prepared to fish for Zander in summer is the rules regarding spawning season. Depending on the country or the state where the fisher is located, there are fishing restrictions that allow them to reproduce without being interrupted by humans, something that can be beneficial for both enthusiasts and the species itself, since they won’t be at the brink of extinction because of people constantly catching them, Thus, there will be more Zander to go around. It might sound like a no brainer, but it is important to respect the existing regulations to preserve the ecosystem and bring a tantalizing dish for dinner without getting in trouble for breaking environmental laws.

Fishing for Zander in the Fall

Similarly to summer, autumn is one of the seasons in which the Zander tend to be more active. During these two times of the year, water temperatures are higher and there’s minimal dissolved oxygen. Zander fish don’t tend to fare well when retained in sacks and these conditions could make things worse for them. This could be the reason why they tend to congregate during autumn and summer, inadvertently becoming the perfect target for the fishermen that have their sights set on them.

Another great thing about fishing for Zander during autumn is the size of the fish. Fishing in Sweden suggests that this is the perfect time to catch the biggest of them all. This is due to them spending the summer feeding. As a result, they start gaining weight from then on, especially throughout the ice fishing season and this doesn’t seem to change once spring draws near. However, once the spawning season starts, they tend to lose a few pounds. With all this information, fishing in autumn seems promising, doesn’t it?

The Zander fish have a tough, muscular body that resembles a pike. Their eyesight allows them to hunt for their prey in murky waters and they’re easily spotted during dawn and dusk, due to the advantage they have over their meal in these times. These fellows are extremely active during autumn and summer, mostly because they prefer warmer climates, although some fishermen have been able to catch them in winter. However, this is due to fewer people looking for them. Another thing to keep in mind is that they tend to gain weight during summer but lose it before spawning.