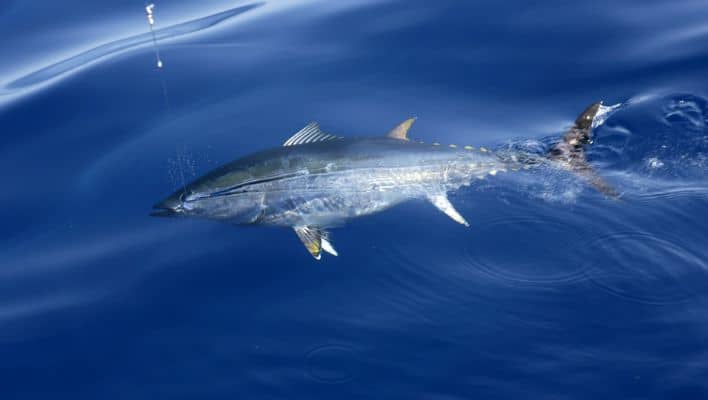 Tuna fish is a well-known ingredient in several dishes, especially for Asian cuisine. Stores are flooded with them and tons of people want to get their hands on them. With that being said, this guide will focus on the Best Time of Day to Fish for Tuna to catch them, as well as providing fishing tips.

Best Time of Day to Fish for Tuna

Tuna fish are known to be pelagic species, which means that they roam around the high seas. Thus, the best time to catch them is when they’re in the area, something that might seem like an obvious answer unless taking into consideration the fact that they, in a way, are nomads. However, according to the experts at Mossy Oak, the chances of catching them increase under certain conditions.

When it comes to the yellowfin tuna, they tend to spend more time close to the surface at night, while they remain on deeper waters during the day. This is mainly because the bait tends to rise during this time, followed by the predators that come out for their next meal. Another thing to take into consideration is how much the tuna fish love cloudy waters, which happens when the river’s freshness mixes with the ocean’s salty water. This can provide a massive advantage over the bite, especially when there are overcast skies. With this information in mind, fishermen only need to prepare the blue runners, herring, mullet, flying fish and ballyhoos, which are known to be the best bait for them.

Best Time to Fish for Tuna in Winter

This is the end of tuna fishing season, although it’s usually when winter is in full swing. The results will depend on how harsh or mild it was. If the latter happens, the fishing season won’t start up until July, something that can bring delays to any trips that have been planned during summer, which is when things start to heat up when it comes to fishing, pun intended. However, if the winter was mild during that year, the fishing season will start in June, so it’s important to consider the harshness of the winter.

One thing to keep in mind is that tuna fish are warm-blooded creatures. Thus, they can be active during the colder months, unlike their cold counterparts. This means that, even if the fishing season finishes in November, tuna can be found here and there. The stripy and yellowfin variants can turn up if the fishermen are looking for them offshore. Tuna and Spanish Mackerel are two of the species that can be spotted during winter.

Best Time of Day to Catch Tuna in Summer

Summer is the beginning of the fishing season for people living in the U.S. As it was mentioned in the prior section, the harshness of winter determines when it will officially start. On average, it tends to begin between June and July, to conclude in November. August is one of the summer months that provides the best results when it comes to fishing for tuna.

Albacore tuna tends to be the first to appear at the beginning of the season, followed by bluefins and, occasionally, yellowfins, According to the experts at Newportlanding, the same fishing techniques tend to apply regardless of the species that are being targeted. However, albacore tends to be spotted from 40 to 70 miles away from the coast, sonar marks, trolling jigs and feathers being among the methods of choice to get ahold of them. Another thing to mention is that fishing for tuna can go from lack of activity to a hungry bite in a heartbeat, so it’s important to be prepared.

Best Time to Fish for Tuna in the Fall

Alongside August, September is one of the best months to fish for tuna. Depending on whether there’s a strong migration or not, autumn can become a prime time to get the biggest bait of them all. Things like big tides and strong winds can increase their numbers in the area as well. This is mainly because they tend to hide from the latter.

Tuna fish tend to roam around the high seas. Thus, the best time to catch them is when they’re in the area. Yellowfin tuna tend to swim closer to the surface during the night while remaining on deeper waters for the rest of the daylight hours. These species tend to love cloudy waters, which happens when the freshness of the river mixes with the saltiness of the sea. Their fishing season tends to starts from June through July, depending on how harsh the winter was. The best months are August and September, although they can be found offshore in winter.