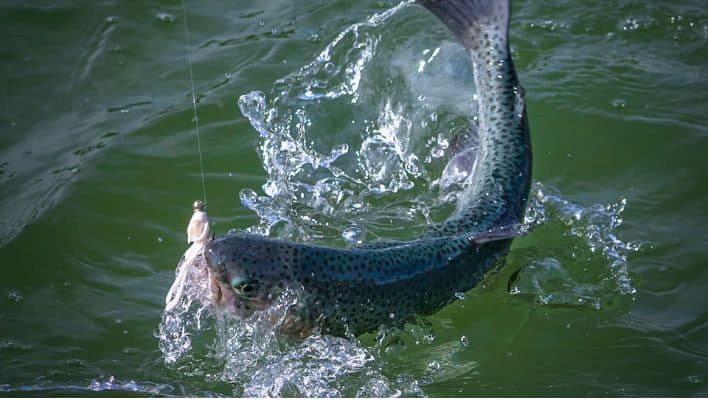 Steelhead trout is one of the most popular specimens for sport fishing. They’re fighters that provide an exciting experience, so it’s understandable why people want to get a hold of them. This guide will mainly focus on the Best Time of Day to Fish for Steelhead and catch them as well as provide the best tips for it.

Best time of Day to Fish for Steelhead

The experts at Take Me Fishing state that the steelhead and rainbow trout are genetically similar, the difference being the fact that they don’t stay in creeks and rivers. They also affirm that these critters can be found at any time of the day, although low light conditions tend to be the favorite when it comes to getting ahold of them. Steelheads can be spotted at first light in the morning and once the sun is setting. It is common knowledge that these two timeframes provide the best results when it comes to getting the best bite.

One interesting thing about steelhead fish is that they’re popular among sport fishermen. This is mainly because they’re fighters and provide an exciting experience. Not only they’re a worthy opponent for experienced fishermen but also a versatile meal since their fillets can be smoked, grilled, boiled or fried. Steelheads tend to feed on baitfish, such as alewives and rainbow smelt, although they can also eat insects and other fish.

Fishing for Steelhead in Winter

Winter steelheads tend to move in groups that are not too fond of catching fast-moving bait. This is mainly because of the cold temperature of the water during these months. To catch these critters, it is recommended to use a nymph fishing set up, since they’re subtle and perfect for fish that aren’t too adventurous and easily spooked. This allows the fishermen to repeatedly place their bait where they’re going to strike and soft dropping it on the surface. With this in mind, fishing for steelhead during winter can be both enjoyable and efficient.

Most of the time, trout feed on aquatic insects, which means that nymph fishing provides an advantage over them like no other during these cold months. Research suggests that using a floating line with long leaders can add up to the good results that can be achieved by using the aforementioned technique. Additionally, heavily weighted flies are also a great option since they allow the fisher to get the bait where the biggest steelheads are, so it doesn’t hurt to try between these two.

During this season, specifically in its earlier stages, steelhead trout tends to swim closer to the surface, mainly where the water temperatures mix. Their summer bite is widely known as one of the most prized catches. These fellows are seemingly not that fond of low, clear and very warm waters since they’re difficult to spot during these times, specifically by mid-August. According to Riptide Fish, steelhead trout are caught in June, July and August.

Fishing for Steelhead in the Fall

Autumn can provide good results when it comes to fishing for steelhead trout. This is mainly because of the cooler evenings and lower light conditions during September and October. When it comes to fishermen from the west, the fishing activity increases once these months have arrived. The best time for steelhead fishing during fall is usually around 11 am since it’s less crowded and the fish have already calmed down from their morning rush. Using non-traditional bait is a must because steelheads would be more compelled to bite something that they hadn’t seen before. With this information in mind, the only thing left is to prepare the rods and the boat.

Steelhead and rainbow trout are genetically similar, with the only difference being that they don’t stay in creeks and rivers. They can be easily spotted at first light in the morning and once the sun is setting, mostly because they don’t tend to be too fond of clear and warmer water. During winter, they tend to swim closer to the surface, specifically where the water temperatures mix. The cooler evenings and lower light conditions that September and October provide make autumn a great option to fish for steelheads. However, they’re harder to spot by mid-August because of the water temperatures.