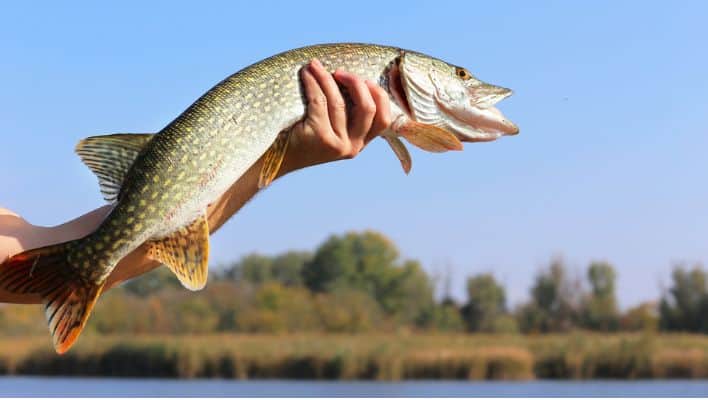 These big and smart predators are widely popular in the fishing world, despite how challenging it is to catch them. However, this doesn’t deter the enthusiasts and they keep persevering until going home with a big specimen. Due to how rewarding it is, this guide will help you find the Best Time of Day to Fish for Pike to catch them.

Best Time of Day to Fish for Pike

The pike fish are predators that dominate any water they swim by. Since they’re on the top of the food chain, these critters are roaming almost everywhere. Despite how challenging it might be for both experienced and new fishermen, the pike is the most popular in the fishing world. They also come from a long line of predators, evolving to be one of the smartest species known to man.

According to Fresh Water Fishing Advice, the best time to fish for northern pike is during early to mid-morning. This is mainly because the water temperatures are usually lower before the midday heat. In the morning, the northern pike is often spotted in shallow waters. A great tip during these times is to use spinners or spoons along weed edges, preferably near the cover in shallow water.

Early morning and late evening tend to be the best times to fish for pike during the day. They can also be spotted at night but when it’s not too dark. One interesting thing about them is that their sleeping cycles tend to occur a few hours after sunset, becoming more active before dawn. With this information in mind, preparing the rods and the bait will be necessary to get ahold of the biggest specimen of them all. On a side note, fishing over deep vegetation in the evening can provide great results.

Best Time to Fish for Pike in Winter

During winter and spring, pike tends to be more active than any season. Thus, they become a favorite when it comes to ice fishing. Due to the sun not being as potent as during the hotter months, they can be found throughout the day with their activity peaking in sunrise and sunset. Since weeds are not available for them to eat, pike cover behind rocks and tree branches. They can also be found where the river or lakebed is deeper.

According to the experts at Pike Caster, unlike other seasons, the temperature is not a factor anymore to catch pike during winter. Instead, the water remains cold during the day, something that makes them extremely comfortable. However, it is important to take into consideration how thick the ice is since they will move to deeper waters once they run out of space. Another recommendation is to use a small rod and a reel set with tip-up rigs, accompanied by dead baits that can be easily found at a store. Of course, an ice drill is a must during these times.

Best Time of Day to Catch Pike in Summer

Summer has proven to be a difficult time for fishermen since the pike is known to be less active during this season. This is mainly because they don’t tend to like hot climate that much, so they tend to limit their movement to not starve. Of course, they will choose the cooler times of the day to hunt, such as sunrise and sunset, where they’re more likely to bite.

Pike tend to look for more natural cover options because of the water temperature. Thus, they reach for the deeper parts of the lake. Fishing from shore can be an alternative but it cannot be stressed enough how important it is to find spots that are away from direct sunlight since they tend to avoid it at all costs. Once the fishermen have done so, they need to look around places where they would likely hide.

Even if it’s harder to lure pike during summer, it’s not impossible. The experts at Pike Caster recommend practicing dead bait fishing, which is said to provide good results. However, not all is lost, since they’re still willing to bite if the lure is close enough for them to get ahold of it.

Best Time to Fish for Pike in the Fall

Unlike other seasons, the time of the day stops being a crucial factor for their activity. Sunrise and sunset provide great results but they can be caught at any moment, especially in overcast days. This climate has proven to be one of the most productive and fishing before a thunderstorm is the most recommended option, despite how potentially dangerous it is. When it comes to location, this fishing season provides a wider range of possibilities, although the weeds they often feed on start to die in autumn.

Pike tend to hide under rocks, fallen trees and even overgrown plants. They are also quite fond of river slacks, mainly because the water tends to stagnate there. One interesting thing about fall pike is that they love to get their fins on huge prey, which will translate into catching the biggest specimen of them all.

The pike fish are smart predators that dominate their ecosystems. The best time to get a hold of them is from early to mid-morning since they tend to prefer colder temperatures. Summer is the hardest time to fish for pike because they’re less active during the hotter months, mainly because they’re not that fond of water that is warmer than they’re comfortable with. Fall is the starting point of the fishing season and the temperature starts becoming less of an issue to fish for them, compelling them to become more active as winter approaches. Winter is when their activity is higher.

If you are looking for When is The Best Time of Day to go Fishing but just want a guide for any fish then we have put this together for you.