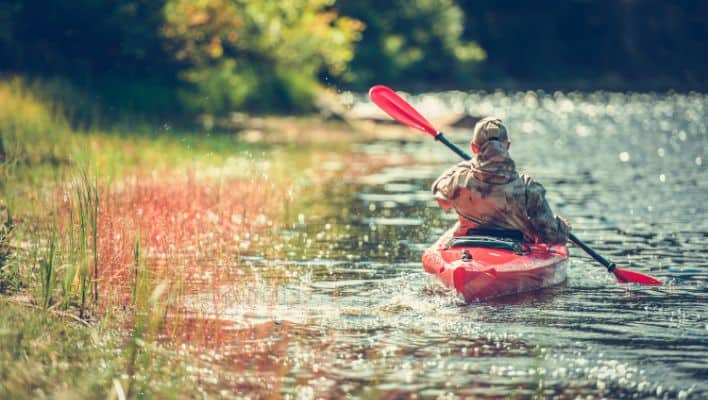 When it comes to kayaking, speed is one concern as well. Not only paddlers want a sturdy vessel, but also one that can go as fast as they need. Of course, the speed not only relies on the material is made of, but also weather conditions that will be discussed.

Before delving into the topic, it is important to know that the design of the hull has a significant value when it comes to stability. Therefore, the experts at Kayaking World advice both experienced and new kayakers to ask how the vessel performs in the sea, particularly consulting someone who has built or designed, as well as paddled them. This will give them an idea of how resistant it can be while either competing or leisurely floating across the river. With that been said, let’s jump right in.

The average speed of a kayak will depend on several factors, one of them being how fast the kayaker can paddle. For someone who already knows the ropes and has been doing it for a while, their average kayaking speed reaches the 3 miles per hour threshold. Of course, this is not everything when it comes to how fast a kayak can move, but more on that later. The paddling technique is also among the factors that can determine whether the vessel can move fast or not.

Another factor that can affect the kayaking speed is the load on the vessel itself. The lighter it is, the faster it will be able to move. The number of paddlers can also influence this since two can travel quicker than one, assuming that the kayak is not heavily loaded. On the other hand, beginners tend to be slightly slower than experienced kayakers, since they often go for a leisure paddle that moves with an average speed of 2 miles per hour.

The weather conditions are another thing that can have an impact on how fast someone can paddle. Calmer waters tend to provide more speed while exploring the waterways, whereas strong currents that are not on the kayaker’s favor are bound to make them move slower. A windy day can also affect the paddler’s speed, whether they’re going against or with it. On the other hand, the place where the paddling is happening is also crucial for the vessel’s speed, since it tends to be different between the sea, a river and a lake, but more on that later. If the current is on their favor, they can go as fast as 5 miles per hour.

Factors that affect Kayak speed on the Sea

To expand more on how paddling on the sea will affect the kayak’s speed, its conditions can be one of the key factors when it comes to it. The experts at Kayaking World suggest that, if the kayaker paddles at 2.5 knots of speed and the opposing current move at a similar range, this can make things easier for the average practitioner. However, they will paddle at 5 knots if it’s in the direction they’re heading to.

They also recommend checking a marine chart and a tide table before even considering to leisurely paddle that day. As for the wind, it can cause trouble at 10 knots or less for more experienced kayakers, whereas a beginner will have a more difficult time if they’re paddling into a 20-knot headwind. Thus, checking the forecast is as important as checking the marine chart.

The type of vessel the kayaker is paddling in also plays a key part in how fast it will go. Narrow and long kayaks tend to travel faster than their counterparts, an example of this is the racing models, which tend to be more streamlined. The lightness of the vessel will also have an impact on its average speed, as well as the type of gear the paddlers are carrying while exploring the waterways.

Going back to the weather conditions and vessel type, the average speed correlates with these two factors. For example, whereas lighter boats are easier to lift and quicker to move, they’re not very good with an extremely windy climate, without mentioning that they can cause drag in the water if they flex too much. Vessels made of composite materials, such as fiberglass, diolen, kevlar, carbon, and a mixture between these two, are lighter and stiffer than their polyethylene counterparts. Thus, the more rigid they are, the faster they move. These sturdy fellows are the preferred option for those with a lot of experience under their belts.

Another great thing about composite vessels is how less they tend to get fewer scratches and nicks, which are often the main cause of turbulence for the boundary layer of the water, increasing drag significantly. On the other hand, foam core boats with three layers of polyethylene tend to have better flotation and thermal insulation, being more rigid than their regular polyethylene counterpart. To summarize, composites are sturdier than polyethylene vessels, thus, this translates into them being the fastest of them all, although the latter bounce better, so not everything is hopeless when it comes to them.

An average kayaker that has moderate experience in the water and equal strength can paddle up to 5.5 kilometers per hour for a long time, assuming they’re using a standard plastic 5 meters long, 60 centimeters wide kayak with light cargo. Back to the experienced paddlers, these tend to have a better performance on faster boats that usually have a beam of 56 centimeters or less. Shorter 4 meters kayaks allow the moderately experienced paddlers to go to the vessel’s full capacity.

The average speed of a kayak depends on how fast the kayaker can paddle, as well as their experience and strength. The average paddler can move at 5.5 kilometers per hour, whereas the most experienced reach the 3 miles per hour threshold and beginners can go up to 2 miles per hour. Of course, this will also depend on the weather conditions and the material of the vessel. Polyethylene kayaks are less stiff than composites, such as fiberglass and carbon, which makes them slower in comparison. On the other hand, narrow and long vessels are the fastest of them all.